THE JOURNEY TO CANADA In 1896 several farmers from Zichydorf, a village located in the Southern Banat region of the Austrio-Hungarian Empire began to immigrate to Canada. They left Zichydorf village and traveled north through Europe to one of three common sea ports; either from Hamburg, Germany; Liverpool, England; or Italy. The immigrants boarded ocean liners at these sea ports and arrived in Canada 10-14 days later either at the port of Halifax, Nova Scotia or at the port of Montreal, Quebec. Then the Zichydorf immigrants traveled by train to Winnipeg, Manitoba were they made a final train connection to Qu’Appelle, in the district of Assinaboia , North West Territories (later named Saskatchewan), Canada.

GERMAN HOSPITALITY The Zichydorf immigrants found accommodation at Saint Joseph’s Colony near the Qu’Appelle railway departure point. Saint Joseph’s Colony is a small community located four miles east of Balgonie, Saskatchewan, and one mile south of the Canadian Pacific Railway (C.P.R.) mainline. The settlers who formed Saint Joseph’s Colony decided, after going to their quarter section homesteads, that they would establish a hamlet in order to strengthen social, religious, and community ties. These original settlers were German Catholics who immigrated mainly from Josephstal, a small colony near Odessa, in Southern Russia. The settlers also extended hospitality to new German immigrants from Europe and billeted them until a homestead was found. A new factory had just began operations in the 1898 at the neighboring town of Qu’Appelle. Many Zichydorf immigrants were able to find work at the Qu’Appelle Felt and Boot Company to earn money for the family’s survival and save up for a homestead. It is likely here that other Zichydorf immigrants met each other and waited for homestead land to become available in the Regina district.

WAITING FOR HOMESTEADS Drinking water was a severe problem for all homesteads around Regina and particularly South of Regina as far as the town of Lang. The Government sponsored well digging crews to search for water but those efforts were rarely fruitful. Thus, most new immigrants were hesitant to move onto a homestead until they were assured of a water supply. The Zichydorf immigrants continued to stay at St. Joseph’s Colony and wait for suitable homesteads and hire themselves out for money to feed their families.

However, around 1897 a pioneer named Spence happened to be “willow-witching” for water on the North half of 21-16-19-W2 (Section-Township-Range-Meridian). After finding a potential location Mr. Spence used a post hole auger to dig down about forty feet were he discovered a flowing-well or artisan well. Mr. Spence was somehow associated with the Zichydorf immigrants who were staying at St. Joseph’s Colony and who worked at the Qu’Appelle Felt and Boot Company.

THE COLONY LOCATION A short time later, in 1897 the group of German Catholics who immigrated mainly from Zichydorf, Hungary joined together to form “Zitchydorf Colony” at the site of Mr. Spence’s flowing-well. These pioneers came together out of simple need _ water. Homes were built on either side of one North-South street with the flowing-well in the center of the street. The flowing-well is situated on the edge of the road allowance and in the Northwest corner of 21-16-19-W2 (Section-Township-Range-Meridian). The original hand-dug well did not stay open because of ground caving, so the government installed a steel pipe casing that kept the well open. Water from the flowing-well ran continuously down the street in a Southerly direction.

BUILDING THE COLONY Zitchydorf Colony became a 40 acre community with 21 lots located five and a half miles South of Victoria Avenue, Regina, Saskatchewan, Canada and two and a half miles East of Albert Street/No. 6 Highway. The Banat pioneers applied the home-building customs that were brought from the old country. First, they built house walls about two feet thick from prairie sod arranged as bricks. Then poplar trees were gathered to frame the roof so that dry grass or wheat straw could close off the roof.

THE FIRST PIONEERS The 1901 Canada Census for Springdale District #204 shows that Zitchydorf Colony comprised of eleven initial families, all of whom immigrated to Canada between 1897 and 1901. Several of these families were either directly related to one another or had ties through marriage. There were five Bolen families and three of these families were directly related to each other. The Bolens were uncles and/or cousins to the Joseph Anwender family who was also related by marriage to the Henerich Doman family. Then families such as Muller, Wieszmuller, Wingert, and Amon date back to humble the beginnings of the Zichydorf, Austrio-Hungary village.

ECONOMIC HARDSHIPS Money was scarce during the first years, so most colonists continued to work full time at Qu’Appelle Felt and Boot Company while relatives or friends worked their homesteads. At least one member of the family worked away from the homestead to supplement the farming income. Then during the Winter months with no farming work several pioneers found work with the Canadian Pacific Railroad in Moose Jaw, Saskatchewan. The Qu’Appelle factory eventually ran into financial difficulties and was forced into liquidation in the spring of 1900. Then the unemployed Colonists hired themselves out as day laborers in the City of Regina, Saskatchewan or as farm laborers around the Regina district. The Qu’Appelle and Indian Head districts also had a small lumber mill and flour mill that provided jobs. Outsiders had the opinion that Canadian farming conditions were so poor the German immigrants had left their homesteads for better living conditions in the city of Regina. On the contrary, Canadian homesteads were very large by European Banat standards so it took several years to prepare the homestead land for farming. Hence, the Zitchydorf colonists were working doubly hard with urban jobs to feed their families as well as on their homesteads to expand farming operations.

LARGE HOMESTEADS Homesteads were 160 acres of bald prairie that had to be broke with a one shear hand plow and a team of two or four horses. The pioneer broke from ten to thirty acres of new ground each year until half of the homestead was available for wheat crops. The first fruits of harvest were usually sold immediately for cash to buy winter provisions. In the early winter, more of the wheat harvest was hauled to the nearest mill to be ground into flour for baking needs. Thus a 14’x18′ granary would be large enough to winter the remainder of wheat that was kept as seed for next year’s crop. The remaining 80 acres was kept in grass for livestock grazing in the summer and winter hay feed. A photograph of Zitchydorf colony at the Saskatchewan Archives shows that hay feed was gathered up and stored inside a poplar tree fence. The livestock ate from a tee-pee style poplar tree frame that held the hay feed. A 12’x18′ stable would keep two horses, at least one cow, and a couple of pigs.

NEW COMMUNITY REALITIES Zitchydorf Colony began to disintegrate around 1904 and by 1910 all but the Joseph Anwender family had relocated to their homesteads. There are at least three theories that can explain the colony’s disintegration. One belief is that the colonists had disputes amongst themselves, so internal conflict may have caused the break-up. As pointed out earlier, most of the colony families were related to one another either directly or through marriage. A second explanation is that Canadians in the Regina district resented and opposed the presence of these new German-Hungarian immigrants. It is also possible that Canadians actually felt threatened by this German Colony especially with the mounting tensions in South Eastern Europe that triggered WW-I.

A third reason is that the pioneers had to travel 4-10 miles round-trip from the colony, by horse each day they worked the homestead. The European tradition of living in a village and farming the land was practical with small 4-8 acre plots that were located around the village. However, in Canada a homestead was 160 (i.e. a quarter-section) acres and the Federal government encouraged farmers to spread out so that they could later purchase adjacent quarter/half-sections and entire sections (i.e. 640 acres). Whatever the reason, Zitchydorf Colony was abandoned by 1910 and the pioneers moved their homes onto the homestead or moved to other districts in Saskatchewan where well water could be found on the homestead.

NEW WATER SUPPLIES Meanwhile, the pioneers who stayed in the Springdale district continued to rely on the flowing-well as the only source of drinking water in the area. Thus, the flowing-well and adjacent Anwender farm yard became known as “Anwender’s Corner.” Throughout the years, the Government and Municipality dug at least eight wells at the original flowing-well site because the steel pipe casings rusted out. One farmer eventually found water on the Southwest corner of 27-16-19-W2 (Section-Township-Range-Meridian), due east of the flowing-well. This second well site was bored with a 2 foot diameter casing to a depth of 50 feet where water was found. Then, the water rose to 15 feet below ground level and remained at that level regardless of the amount of water pumped from the well.

A HUGE UNDERGROUND LAKE Geologists later discovered that the flowing well and the second well site both belong to a huge underground lake that also supplies water for the city of Regina at it’s Boggy Creek and Mallory Springs wells. In the 1940’s the Government finally provided financial grants for dug-outs so that neighboring farms could have their own water supply. Pete P. Anwender, Joseph’s youngest son ran 500 feet of plastic pipe from the flowing-well to the farm house and yard. Then in 1992 Pete’s son, Harvey A. Anwender dug a new well and inserted a plastic liner into the well casing. Hence, the flowing-well is still providing a steady and continuous supply of water to the Anwender farm today. 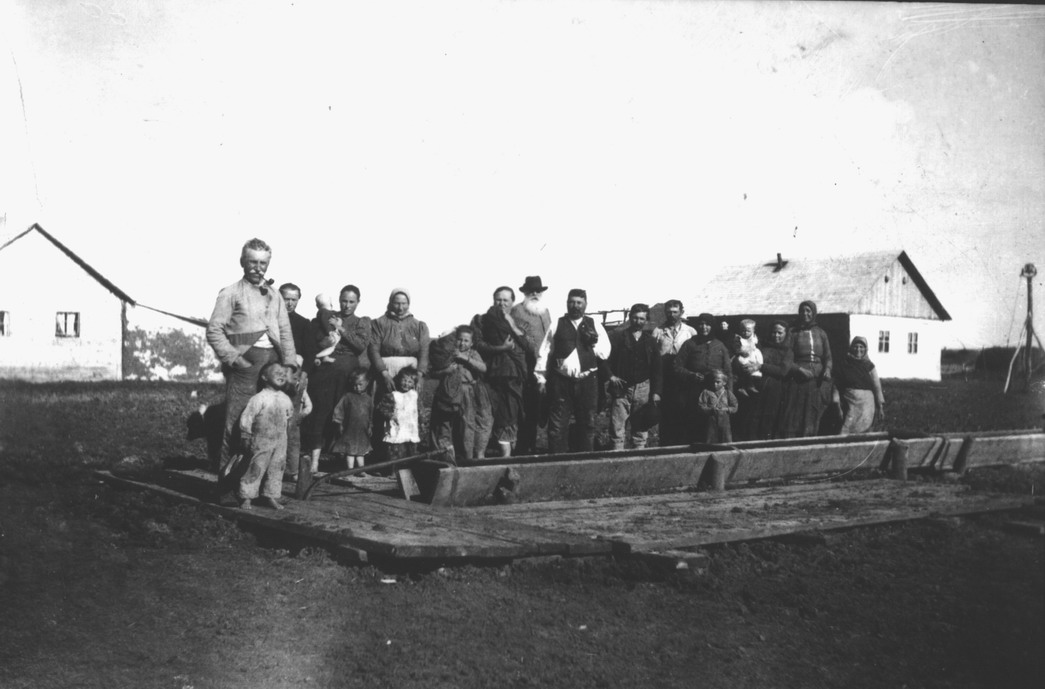 Photo from Saskatchewan Archives Board