In 2010 some visitors took pictures of printed items posted on the wall in the Kozma church. Here is an English translation by Laszlo Rudolf from the original Hungarian.

A Brief History of Vérteskozma

According to chronicles, the Vértes mountains that surround Vérteskozma got their name after the armour left behind by the soldiers of Henry III., having sustained a defeat in 1051. (Translator’s note: vértes = full of thrown-away armors) The title-deed first mentions Cusma as a populated prairie in 1329. After the Turkish occupation of Hungary, it was the Eszterházy dynasty that possessed the neighboring areas from Csákvár to Tata.

In 1733, Earl József Eszterházy introduced protestant Slovaks into Kozmapuszta from Upper Hungary. In 1742, he invited Catholic Germans in place of the migrants. In 1747, a small wooden church and a parsonage were built, and the first parson was appointed. In 1750, the number of the village’s inhabitants was around 400-450, and the first school was launched with 50 students. On September 5, 1779, the new stone church was sanctified in honor of Saints Cosmas and Damian.

Besides agriculture and forestry, the locals made a living from burning charcoal and lime. The 1834 renovation of the church brought it to its present form. In those days, two-roomed houses with chimneys, crossbeams, and timbered ceilings were built according to the current land division.

In 1908, Kuzmapuszta (Little Kozma) got the right to become an independent village under the name of Vérteskozma. In 1922, the three bells that were taken away during World War I. were replaced by two smaller ones which were later sanctified with the support of local donations. The independent German-speaking Vérteskozma was merged with the also German-speaking Gánt in 1928, a situation that holds up to the present day. In 1941, the village with 400 inhabitants built a new school next to the church.

From the Christmas of 1944, cavalrymen from Nyíregyháza and Soviet soldiers fought for three months, which cost many lives, resulted in evacuations and serious material damage. On May 18, 1946, three-quarters of the German-speaking inhabitans of Vérteskozma were deported to Germany. They were only allowed a 55 lbs pack on the wagons. In September of 1946, families from all around Hungary moved into the vacant government-owned houses. The population exchange continued in 1948 in favour of the newly relocated people, when 28 families from the German-speaking Szár village were transferred to Vérteskozma. In the early 1950s, after allowing the former residents to return to the village, vacant houses were being occupied by working-class families, since the coal-basin of Tata provided a secure living for them.

In 1955, electricity was introduced, however, the urbanization of the area made miners and experts move away, leaving the government-owned houses abandoned. With the decrease in the number of students in 1962 and 1966, the local school became no longer operational.

In the early 1970s, keen-witted townspeople recognised the beauty of bedraggled houses and their surroundings, and bought these abandoned buildings for recreational purposes. The village has been reborn since then; new houses have been built according to the architectural style of the XIX. century.

In 1977, the Catholic parsonage in Vérteskozma ceased to exist. In 1988, the Vérteskozma and its Environs Traditionalist Association was eastablished and is still functional. The local self-government operated from 1990-2006. In 1992, on the anniversary of the people’s relocation, the village erected a monument in honor to the expelled and the defamed in Várgesztes. In 1996, funded by the state, Várgesztes expanded its piped water supply to Vérteskozma. In 1997, on the 250th anniversary of the existence of the Parish, the aisle was renovated with the help of the Vérteskozma and its Environs Traditionalist Association. In 1999, the village community erected a gravestone in the village border, at the tumulus of Hungarian soldiers who lost their lives in 1945. Levente Thury’s work, the Millennium Column, was inaugurated on September 30, 2000, on the village’s feast day, with significant financial aid from the local authorities and the Association. In 2005, aided by the State and the European Union, the tower, the roof and the walls of the church were restored and the bell system automated. In 2006, the Hungarian Home Guard erected a wooden headboard in memory of the victims of World War II.

According to legend, Cosmas and Damian were twins, born in Arabia. Since they were fascinated by science, the art of medicine in particular, they left their homeland to study in Syria. Having finished their studies, they moved to Cilicia, and eventually settled down in Aegea. Being Christians, not only were they the physicians of the city, but also its apostles. They never took money for their ser vices, which gained people’s favour. Their preaching and charity brought many to the Catholic Faith. When the Diocletian persecution reached the Church of the East, they were the first to be brought before court by Lysias, governor of Cilicia.

As they refused to abandon their faith, they had to die. They were cast into the sea with both hands and feet bound, but the ropes loosened up and they made it ashore. They were then condemned to be burnt alive, but the flames did not reach them. They were shot at with arrows, but all of them went astray. Eventually, they were beheaded with the sword.

Their torture took place in 303, during the Diocletian persecution, and their first church was built above their tombs. Their martyrdom gained them much respect first in the city of Cyrus, then – having been cured of a dangerous illness by the intercession of Cosmas and Damian – Justinian spread the word in the eastern part of the empire. The first church built in their honor was erected by Pope Felix (523-550) in the Forum of Vespasian. Their feast is held on September 27th, which was first mentioned in liturgical books in the 7th century. Presumably, it was the day the cathedral was sanctified.

Their church in Constantinople became a celebrated place of pilgrimage, where the sick sleep because they claim they are being visited by the two saints who bring them healing.

Saints Cosmas and Damian became the patron saints of the church of Vérteskozma. 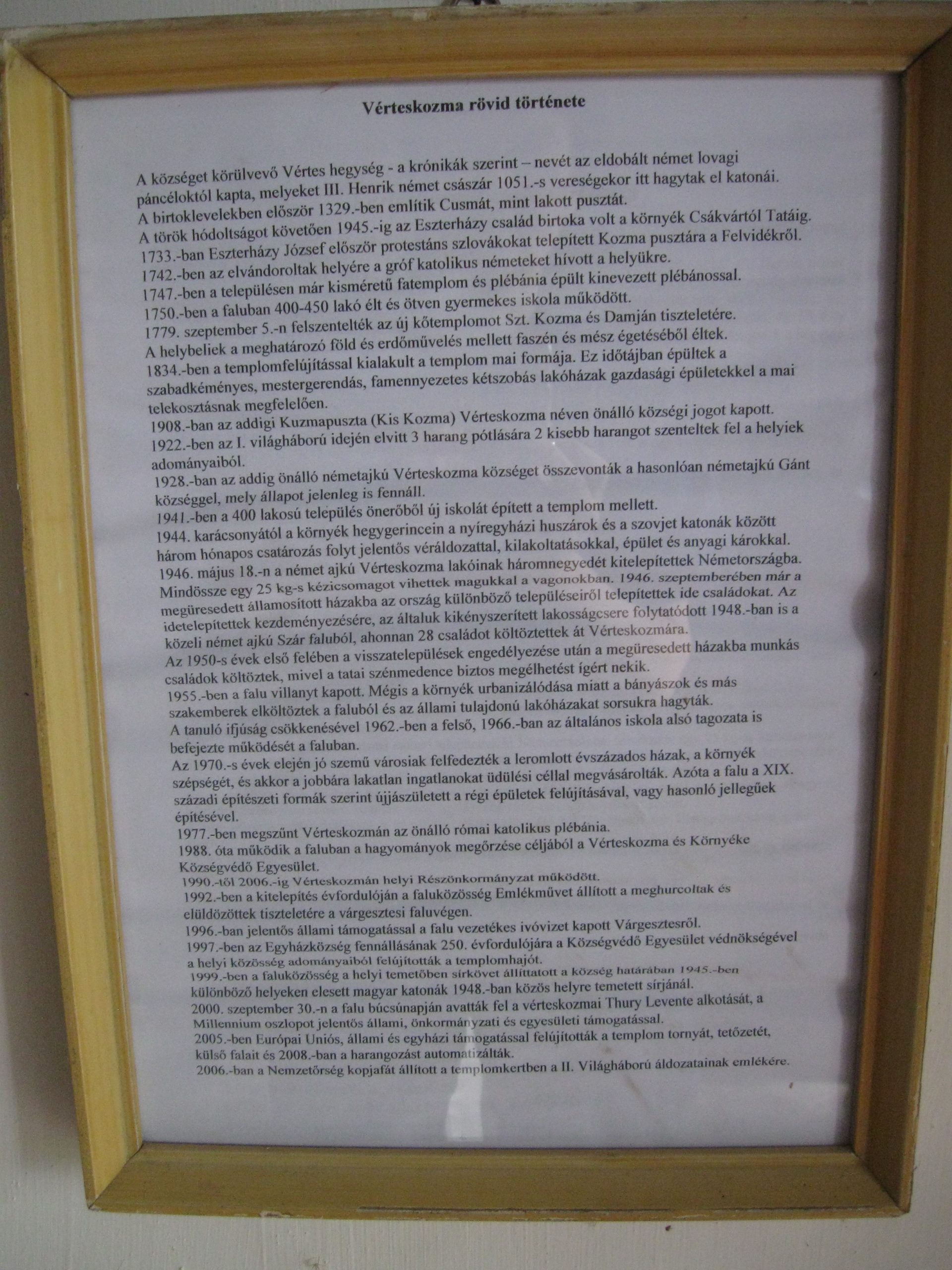